This site is dedicated to Helping Harry Bailey Walk 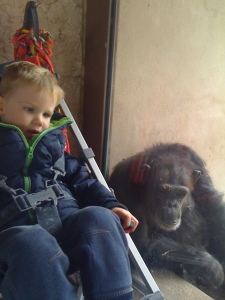 No hospital physio over the weekend so Mum put’s into practise what she know’s and what she has learned since we have been here. We do feel that Harry’s progress has been slow since having the cast’s and I cannot wait until Wednesday to see the back of them, although he doe’s not moan about them to much he has not been himself , not getting about like he used to he would rather just sit in one place and play. Shane, Harry’s mum has been getting him up on his feet using his frame and walking stick’s in his home physio sessions, with good result’s he has even managed to take five steps on his own using the stick’s and considering he has the cast’s we are pleased. On Saturday we took Harry to St Louis Zoo which he seemed to enjoy but still a bit young to appreciate seeing the animals up close i think the highlight for Harry was the train ride around the Zoo he got really excited the zoo was a ten minute drive and free entry you cannot ask for much more . Sunday we had a drive out had to change a toy for Harry that did not work and picked up some shopping and enjoyed a nice roast dinner back at the apartment. This morning (Monday) we was over the hospital for 8.00am to see Michael for the first of this week’s session’s. Harry took a while to come alive and eventually Michael managed to get him going Harry managed 42 leg presses on the total gym on level 10 and that really impressed Michael who said some high school kid’s cannot do that! Harry came off the machine and was shattered his weakness still hampering him and he did get upset so we put him on the trike for a bit of a rest but he does get a stretch as we push him around. We got back and did the chore’s , Harry slept for nearly two hours this afternoon and then a trip to St.Louis galleria for some window shopping and a bite to eat.